The latest episode of The Plotmasters Project went up on the site today. It was an episode Jesse and I recorded LIVE on my Twitch stream for ONLINECON titled: FEATHER!
To the left you can see my finished art for my Plotmasters update of the idea. Below in this blogpost I'll show the steps of the process

If you haven't seen the episode, I've posted the video at the bottom of the blogpost, or you can link to it directly on YouTube here: https://youtu.be/62WCxKYYjSU 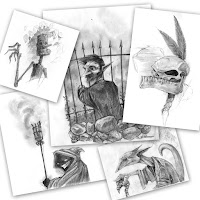 Once upon a time...ok, it was the late 90's, I was drawing a lot of fantasy folklore & fairy-tale stuff. A character that was like a short bearded elf (who was a stand in for myself) kept reoccurring as I built up a mental narrative about him becoming the lonely caretaker for a world when the rest of his kind departed it. He encountered primitive little lizard creatures, a talking wooden man, hooded figures who cultishly want to burn the world down slowly, and a skeleton with tempting offers meant to be a deal-with-the-devil kind of character. It was all a metaphor for things I was experiencing during a bad break-up in college. And in spite of the hurt I was feeling when I was drawing the pieces to the right, I still am very fond of the story set-up and characters.

So for my update, I mainly just wanted to draw the characters better, imply a bit more worldbuilding, and set a tone of melancholy bordering on sadness instead of outright sorrow and despair. I wanted all of the characters to feel like they could be puppets for a Jim Henson company project. Feather himself needed to feel both alone and surrounded by the world he's left with. I drew the characters on different sheets of copy paper (Feather's head and body were drawn separately) and assembled them in Photoshop into a useable composition with a stock border pattern, and some type for the title.

I then printed out the above layout at about 11x17 (on two sheets of copy paper that I assembled into the full image) and attached it to the back a sheet of Strathmore 300 series bristol. Instead of inking at this stage like I normally would, I just did a really tight pencil job. I'd originally thought about rendering the entire piece in graphite, but after just rendering the border, I realized it was going to be too much work and very risky where I could smudge it or mess up the overall value structure all too easily. And there were times where I thought again about inking the outlines, but since I wanted this piece to feel softer than my normal process, I finished the lineart all in pencil and prepared for the next stage.

I scanned the finished pencils into Photoshop and painted in everything in greyscale. This was a digital way of getting my piece to the point of where I'd planned to render the original physical piece in graphite, but in a much safer and more effective way.

I probably don't evaluate my work in greyscale enough. It's a great way to make sure your overall value structure works. In a piece like this with atmosphere, multiple characters, and some light sources the greyscale rendering was an important step.

The last step was to paint in color on new layers that simply tint the values beneath to the color you are painting. It's one of the ways people colorize old black and white photos. I'd debated tinting each lizard creature a little differently, but opted to keep them as a mass of figures all in the same orange tone rather than make them each unique characters fighting for compositional space.
Below you can watch The Plotmasters Project episode: Feather.
Posted by DPetersen at 9:00 AM

Perfect information for us. I will share them with all my friends. it's interesting.