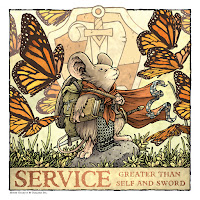 In January I was inspired to do a new Mouse Guard piece. I intended it just to be for fun and for my Twitch stream audience. I'll get into the inspiration points in this post but for today's blogpost I wanted to go through the process for creating the piece––which will also be a new 8" x 8" print for ONLINECON in March (24-28).
To the left you can see the finished colored artwork for the Mouse Guard 'Service' print. And below I'll explain the steps to create it. 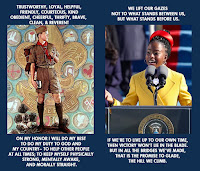 The main inspiration point was Amanda Gorman's poem 'The Hill We Climb' which she performed at President Biden's inauguration. It got me thinking about ideas and ideals learned in my scouting days about being of service to others. Often times, fans can think of the Mouse Guard as a band of warrior mice, when they are really more of rangers, there to do work as helpers. Sure, they at times need to do battle, but more often than not they are avoiding conflict in duties that are of pure service to others. I found this Norman Rockwell cover to Boy's Life and used it as the visual jumping off point.

I also wanted there to be some kind of insect or bird in the image to help show the scale––of what it's like to be very small in a world that is much bigger than you are, and still forging ahead to serve. I landed on a monarch butterfly as a beautiful symbol for the theme.
To draw a cluster of flying butterflies, I made a quick model by printing out the same photo twice (once mirrored) with a twist-tie inserted across the wings as they are glued together. This way I could fold the wings to several positions and photograph it from various angles. To the left is a photo I took with my phone in one of the positions. 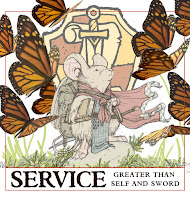 I did a pencil drawing of a Guardmouse on copy paper to resemble the Scout's pose from Rockwell's cover. I thought including a book and pack were important to the image, and so was keeping the sword sheathed and adding a shield to the back (sword, book, and shield echoing the ideas in the guard emblem). The cloak was tied off in front like a Scout's neckerchief. With the pencil drawing done I scanned the art and did a quick digital composition (including adding in fast colors for the mouse) dropping in the Guard emblem from my Mouse Guard enamel pins as well as lots of overlapping photos of the butterfly model.
And then I added in the text 'Service: Greater Than Self And Sword' to get the point across of being a helper rather than a combatant. 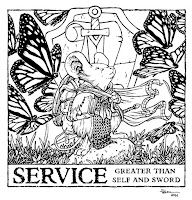 I printed out the above digital composition and taped it to the back of a sheet of Strathmore 300 bristol. On my A3 Huion Lightpad I was able to see through the surface of the bristol to the printout below, which I could use as a guide while I inked.
I used Copic Multiliner SP pens (the 0.7 and 0.3 nibs) to ink the piece. I think it's important to hand ink text like this when possible. I was able to get all the letterforms and spacing just as I wanted with the font, but the imperfections I can add in the inking make it look like it's part of the art instead of a digital effect. 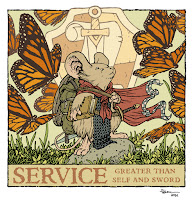 Once the inks were finished, I scanned them in to start the coloring process. That first step is called flatting, where I just color-in-the lines and establish where all the color areas are––which bits are which colors. At this stage I also establish color holds, areas where I want the inkwork to be a color other than black.
A lot of the color choices were already established in my layout stage, but I still had to rebalance those colors and values taking into account the sky color and the text box below.
The final piece can be seen below after I did all the rendering using the dodge and burn tools in Photoshop. This print will be on sale in my online store On March 24th when #ONLINECON starts on my Twitch channel 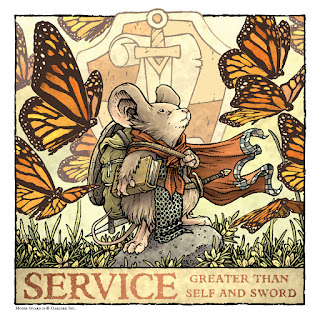 Xfinitive has served 100+ clients in the domain of Web & Mobile development.
Our clients are happy and 100% satisfied by our solutions and services.
Our first priority is client satisfaction and We never compromise quality.
Xfinitive ERP Solution