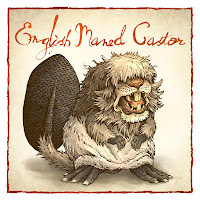 Last Friday on my Twitch Stream, we did the seventeenth community draw-along event #DrawTheExtinct where I posted an image from an old block print I made with a few animal photo inspiration prompts and the idea to create an imaginary extinct animal. I worked on my piece live on my Twitch stream while viewers worked at home and then on Monday we shared our finished pieces.

Here is my finished English Maned Castor. And below are my steps to create it as well as the community submissions. 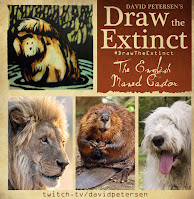 We started with the prompt of my original 2000's era linocut print titled 'Extinct' as well as a Lion, Beaver, & English Sheepdog.

I told the viewers that they could use any combination of the inspiration prompts––they could make their version as cute and cuddly as a pocket pet stray kitten, as monstrous and deadly as a giant kaiju destroying cities, or anything in between. I also wanted this to be an excuse to get their pencils moving. I invited all skill levels, because I'm a firm believer that you shouldn't have to be good at something or pursuing mastery of it to just simply enjoy the act of it...and art is no exception. 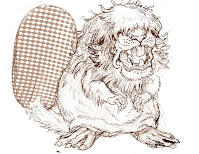 On the Friday stream I started by drawing with mechanical pencil on a sheet of copy paper to try and reimagine the beast. After a few quick false starts, I ended up working on this drawing with the muzzle of a lion, body of a beaver, and the shaggy hair of a English sheepdog. I wasn't sure if the sheepdog was coming through enough, so even at this stage, I was thinking about how color could help get the idea across.

I scanned the pencil drawing and then did some photoshop trickery to get a pattern on the tail that was geometrically spaced similarly as a real beaver's tail to help me in the next step. 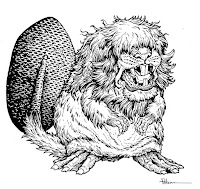 After I was happy with my above design, I printed that piece out on copy paper and taped it to the back of a sheet of Strathmore 300 series bristol. Using a lightpad, I was able to see through the surface of the bristol as I inked the English Maned Castor. I used a Copic Multiliner 0.7 SP pen to ink the art. A lot of the work was in the hair textures and drape––but also in that beaver tail. I ended up laying a piece of paper over the piece and redrawing the texture for the tail before committing it to ink. I then taped that paper to the back of the piece to use as an inking guide. And with the inks finished, I had to end the stream and head over to my Sister's place for a birthday party. 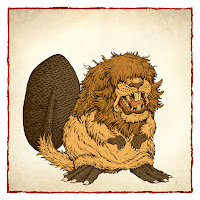 Once the stream ended and I got back from my sister's I started the flat colors. For these Draw The Extinct pieces I have a  template with background and border already established, so it makes some of this color prep work all the easier.

I went with the color scheme of the original lino block piece––but as I looked at it I realized I was right about my premonition in the pencils stage, that the sheepdog colors needed to be used to get the full three species blend communicate.

So, on Sunday (after a full Saturday of Mother's day celebrations at my Sister-in-Law's place, I went back to do the rendering. To get all the highlights, shading, and texture I used the dodge and burn tools with a stock photoshop texture brush. I also selected areas and used the color balance tool to tint them warmer or cooler. Below you can again see the final rendered colors with a border and type applied in this final version. 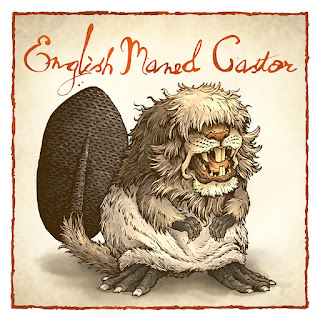 But, as this is a community event, I wanted to share all the other entries posted in the Discord. I awarded a prize and we voted together on a few more (prize winners marked with *) on Monday's Twitch stream and we all enjoyed seeing what each other had done. I hope we get even more participants next month (First Friday!) 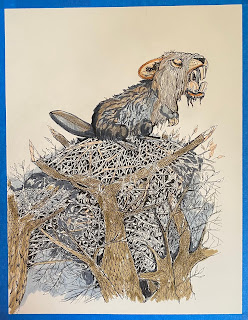 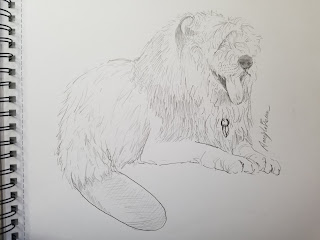 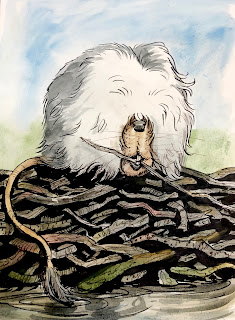 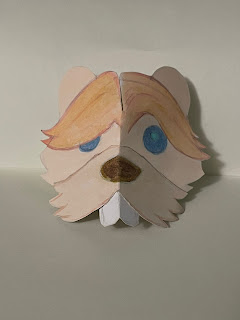 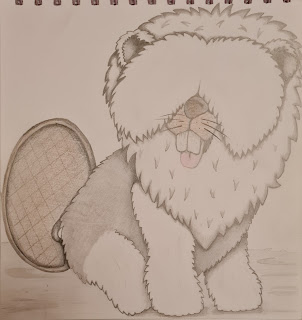 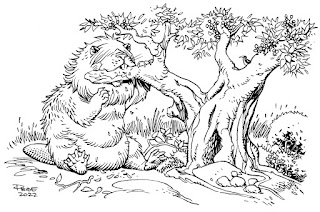 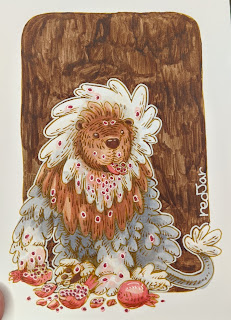 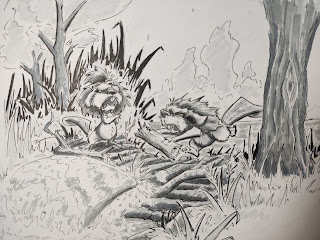 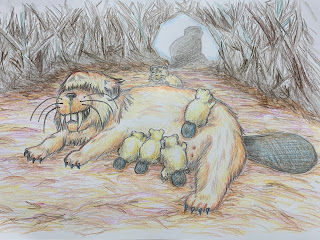 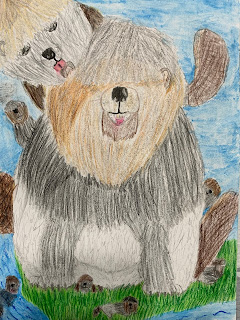 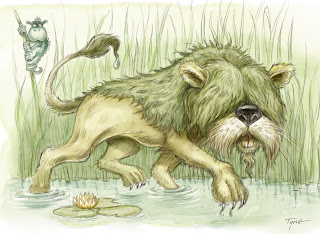