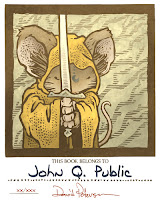 This year I'm starting a tradition of printing a limited signed & numbered bookplate for the year. I debut these at the London Super Comic Con and have them with me for the rest of my 2012 convention schedule. For now I'm limiting these as convention items. At the end of the year, if I have any left, I will offer them online. I'm not trying to punish fans who can't make it to conventions or trying to drive up their post-con ebay value...I just don't want to run out before I finish my 2012 convention circuit. This year's print is a colored version of a relief print (like a woodblock)

I started with a sketch in my sketchbook that I scanned, tweaked, and printed out at the scale I needed it. I also mirrored the image so that when it is carved and printed, it will un-mirror. Using a stick of graphite, I coated the backside of the printed paper. I taped this down to my block (in this case a piece of Speedball Speedy Carve) and traced my lines with a ball point pen. When I removed this sheet of paper, anyplace I had pressed down with a ball point pen transferred the graphite from the back of the paper to the surface of the Speedy Carve.

Unfortunately, I didn't snap a photo of the speedy carve with the graphite transfer, I only got this one before I  started the process. Speedball's website says that you can transfer printed artwork onto the Speedy Carve material using an iron, but I couldn't get that process to work. With the image transferred I used the carving knives shown here to carve away any area I needed to NOT print (ie: white areas). This type of printmaking is called Relief printing because you are carving away an image in relief.: the areas that protrude are the positive shapes (the areas that will print). 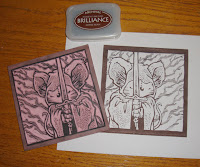 Once the image was fully carved, I used a ink stamping pad to ink up the surface of the block. Usually when relief printing with wood or linoleum you need to ink the surface with a thicker ink and a roller called a brayer, but this Speedy Carve is more forgiving like a rubber stamp, so I'm able to use an inking pad and then place the paper on the surface of the block. It took a few tries to pull a good print, There were a few where I hadn't inked the block evenly, and a few others where I moved the paper and got a double registration. 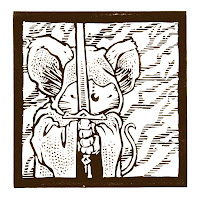 Here is a scan of the straight pulled print. I carved the hatching into the trees in the background to help push them back into the background of the image. All of the simulated stippling was done by carving patches of cross-hatching only leaving little nubs sitting alone like tiny flat-topped desert mesas. For a bookplate though, I wanted the image to be more than a monochromatic relief print though, so I set to coloring it digitally. 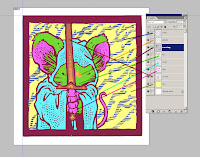 Using the scan of the print, I started flatting the areas. I broke the inked lines into different areas (since I wanted the trees, the moon pendant, and the sword & hilt details to be a different color than the rest of the outlines. The colors seen here were chosen to be clashy & ugly on purpose. This way I can easily see if I got any color in the wrong area (ie: did I stay in the lines) The layer menu on the right of the screen-grab shows that not only are the colors differentiating different areas, but I've made separate layers fro them all (all labeled to make life easier). 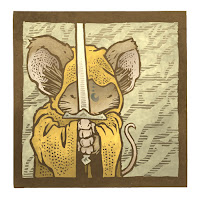 The last step in getting the image ready for the bookplate was to correct and render all the color areas. I did so as I've discussed in past posts using a textured brush and the dodge (lighten) and burn (darken) tools.

The bookplate will be limited to 500 copies, all signed, and sold at conventions for $5.

Hey, my name is John Q Public, can I have that one?

My wife was the first person in the queue at the London super comicon, you really made her day by signing Fall 1152 and drawing a mousegaurd for her. Thanks buddy!