Hand Inking Fonts
When I need to include text into a page of Mouse Guard (or for other pieces) that isn't dialogue or a sound effect, I ink it in by hand. This text is meant to exist within the world of the story itself, the characters can see it and read it, it's part of their world. I'm often pulled out of comic stories when signs, newspapers, even handwriting is done by the letterer. The font rendering rarely matches the look of the artwork well enough. That isn't to say I don't use computer lettering to help me in this task. With the Mouse Guard illuminated manuscript pages (as well as most any other lettering I ink) I lay out all the text on the computer using one or several fonts. 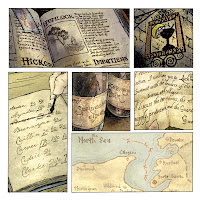 I then print the text and use a lightbox to trace the rough shapes of the letters. This helps me keep the baseline staright (the invisible line the bottom of the text rides on), the kerning correct (the space between letters), and the leading even (the space between lines of text). That isn't to say that I want to keep those things, straight, correct, and even...I don't even want all the 'o's to match...or any other letter for that matter. I can shift the printed sheet as I need to distort the baseline, kerning, and leading. I can distress each letter as I ink leaving gaps and inconsistencies. 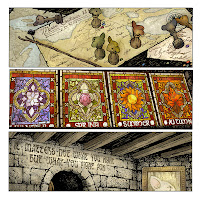 Depending on the scale of the lettering, I can make it less legible and out-of-focus. I can also play with the lettering's texture helping to signify what surface it is on (paper, glass, stone) or what it's written in (ink, paint, or even carved into a surface). Making the text with the same hand, the same pen, and in the same scale as the drawing it will appear in, all factors toward the image looking cohesive and believable. Sure my sound effects and dialogue are computer generated fonts digitally insterted on top of my artwork, but you never see someone's voice coming out of their mouth or see the word 'BOOM' floating in the sky when there is a loud noise...its already abstracted to have those shown as text, so I let them float away from my artwork a bit.

A recent example of this technique I'd like to share was for the Free Comic Book Day hardcover of Archaia's. This wasn't ultimately used, but I was asked to do a few re-designs of the FCBD logo that might tie in with the artwork for the cover. I started by with a few digital fonts, typing up 'FREE COMIC BOOK DAY' and playing with the letter size and spacing. I printed these and using a lighbox I inked them in, sometimes more than once using different inking techniques to simulate paint or ink or embroidery thread.

Here is a scan of both the inked text samples and the 'frames' they would be on top of (some were themed to go with the styles of text, others just designs I thought I could play with). I paired up the text and frames several times over with different combinations sometimes with different color schemes. I narrowed my choices for the logo down to four of these designs, but as I said, ultimately, the new logo was abandoned from the cover and Archaia went with the existing logo.

The Folks over at the Sindicate (a weekly group sketch blog) dedicated a week to Mouse Guard (the Last week of Dec. 2011). Here I'm sharing the contribution by David Lafuente, but I encourage you to also take peeks at the pieces by James Harren, Ryan Ottley, Coleen Coover, and Jorge F. Muñoz

That is precisely the method I've been using for many lettering projects. Depending on the medium, I'll use a charcoal rubbing and a ball point pen to transfer the printed letters. Cool post David.