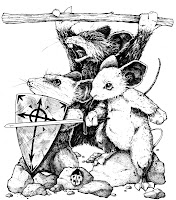 Yesterday on Twitter I posted an image of the first Mouse Guard drawings I ever did back in 1996. I followed that tweet with the statement:


"The artwork moved away from that style...I needed to develop my own work, & not copy the style of someone I admired. When I learned to 'draw like myself' better things happened"

In 2003 I was at a family bbq, and drawing the mice. I did the drawings in ink & fell onto my etching techniques to make grey tones and interesting patterns. Instead of mimicking my favorite artists and illustrators, I was drawing like myself, and building on work & techniques of my own to push the drawing out somewhere new. 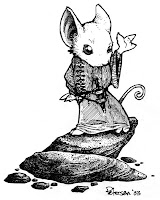 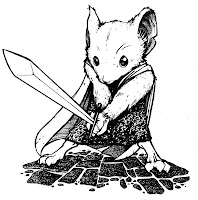 These drawings were also part of the very very first Mouse Guard sketchbook that pre-dated my self-published black and white issue of Mouse Guard in 2005. The first time I set up at the Motor City Comic Con was in October of 2004. I was going to be an artist at an artist alley table, with no book and no previous working experience. All I had were pieces of artwork I made as a fan, for fun, and my own concepts and ideas. Using my home printer, I printed out samples of pieces I'd done. Everything from watercolors of superheroes to pencil drawings of fantasy characters, and of course, some Mouse Guard images. 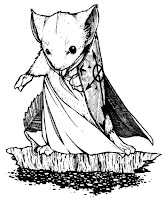 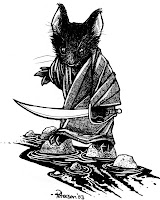 I've posted and talked about these c.2003 Mouse Guard drawings before, but never in the context of them having been printed in a sketchbook. I printed 2 versions of the same book through my home printer. One was 1 character wide and rather tall, the other (after realizing it was a pain to trim every page by hand) was 2 characters wide so that the width matched the paper size. I added some text to the backgrounds of each character (most of the text was a description of the character or their name's meaning). In total I printed between 4 and 7 of them for that convention, and I have none left now. 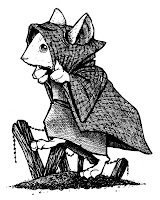 I mention this sketchbook because a fan came out of the woodwork having recently acquired one and couldn't find any information online about what it was, when it came from, or how many were printed. Now I really hope that me typing this up doesn't lead to a few going up on ebay and other fans getting milked (I posted all the images from that sketchbook here so that no one would have to pay top dollar to see the contents) However, I know I can't stop a free market with driven completist comic book collecting fans. I merely wanted to share a bit of history, that, up to this point, I have never publicly mentioned.

I'd also like to echo what I said in the opening of this post, when I stopped trying to draw like the people I admired, and just used their work to inspire me to do better (instead of doing knock-off attempts at their work) better things happened for me, and these drawings represent that. I'm not done trying to be better and learn about my own process. I review recent work of mine to see what was working and what wasn't so that I can build off of the successes and keep making things better. It's advice I think that works no matter what creative field you are in. Be yourself. 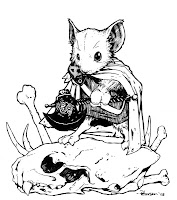 
I'd like to supplement this post with a series of tweets from after this entry was originally posted:

Part of 'drawing like yourself' involves closing off influences for a while & relaxing while you draw. Almost like going into zen-autopilot


It's ok to learn something by copying and emulating, but at some point you have to shut Artist X's book and draw something of your own


Emulating should be about understanding the deeper decisions Artist X is making: why that composition, why that lighting, why that form..etc

You should have a list of influences as long as your arm. If you're targeted on 1 Artist X, your focus is too narrow. Get wider inspiration

I think young people wanting into comics & illustration try to emulate what those industries already have. no, we want to see something new!

It took time to 1st overcome the fear of drawing naturally & then more time learning HOW to draw naturally. Give yourself permission & time

**Edit 2**
While exploring and old file folder, I found a copy of the sketchbook! The cover is a light grey thick stock and the pages are a faux parchment. The original price sticker is still on the cover, and instead of folding paper in half to 'saddle stitch the binding, I just staped the single sided pages together with red staples along the edge. This is going into my personal archive & is not available. 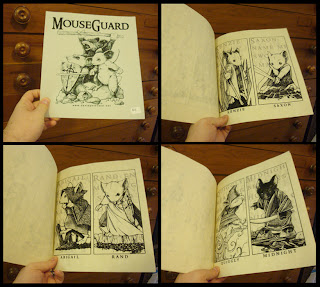 Very inspiring,Señor!
I personally haven't reached that point for I still feel that I'm aping someone elses styles but your words and experiences inspire me to try and find my style.
Thanks,David!

Very good to read this one, for myself and for the teenagers that I have taught. I make it a point to make them conscience about styles of drawing, and ending up with their own style.

Personally I can´t really get hung up on a style. Right now I see that I have developed a certain style/line. And I can´t get it go away. It´s all in the little hand-muscles.

I said it when you posted some of these before, and I'll say it again. These are amazing. I love the style you were going with here. I'm so glad that you shared all of them. I wish there was a way to publish the sketchbook again.

But I also really like what Mouse Guard has become. You have definitely found your own style and it is easy to recognize your work.

Wow it's really been awhile since I've been one here, I wonder if you even remeber me haha. These I really nice I remeber when you first posted them. I love the look and all the line work, I especially like the earily saxon and midnight. And that sketchbook is amazing! I hope I will have the opertunity to talk to you on a ustream sometime (if your even still doing those!)
DAB

Fantastic advise, and such gorgeous illustrations, thanks so much for sharing David! =)