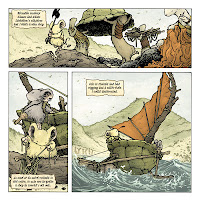 Black Axe #5 Boat Model:
In Black Axe issue #5, Celanawe & Conrad decide to return home to the Mouse Territories. Since Conrad's original ship was destroyed in the storm that brought them to the Isle of Ildur (click here for that ship's model) They would have to construct a new one. In this page to the left you can see the final result of the boat and their work in gathering materials and building it. But before I could draw this page (and all subsequent pages with the new boat) I had to design it, which, as so often is the case, meant building a model.

The boat needed to be made of materials found on the Isle of Ildur and not be too 'worked'. The lumber needed to still look like stick and branches and twigs, not square hewn beams (though I gave myself some wiggle room here since the ferrets may have some spare building supplies around). I also wanted this boat to look very different than Conrad's first ship. For the Legends of the Guard #4 cover, I drew a boat made of a hollow turtle shell, and while I didn't like the idea of copying the boat from that cover, I loved the idea of that shell being the boat's hull. 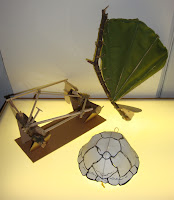 Because I wanted to keep all the shell's details right, and because I didn't know how I was going to attach everything else to the shell, I started by making a card-stock shell model. I looked at a few reference photos and started cutting, gluing, snipping, and drawing on some scrap bristol until I had the shape and pattern I wanted. Then the fear set in. I had built a model shell I really liked, and I didn't want to start gluing more parts to it for fear I may not like the final result and not be able to salvage the shell to start over. So everything I made had to be modular and attach and detach from the shell without glue. This also made drawing the panels when the boat is being constructed easier. 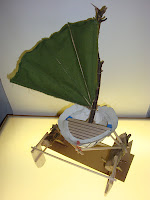 The catamaran like pontoons and the stick trusses secure to the shell with some rubber bands glued to the shell's front and back. The mast, sail, and deck slide in to a bristol board groove along the back edge of the shell's opening. Speaking of which, the sail is modeled after Chinese Junks and has florist's wire along the top ridge so I could bend the sail into shapes like it was caught in a billowing wind or collapsed up for landing in port. When I was a kid I had a wooden model kit of a catamaran and I did my best to replicate the rudder design from memory. Sure I didn't need to make the rudders pivot and work in tandem for sake of the model...but I did.

Watercolor Wednesday:
Last week's Watercolor Wednesday piece was of the folklore trickster Fir Darrig. Here is a better look at the piece in case you missed it. Fir Darrig is a character I did a few short comic stories of in the past (found in the out-of-print Voices 1 and/or Ye Old Lore of Yore). The paper I did this on already had a mottled parchment-like tone watercolored on it before I started. I used the parchment watercolor piece as the digital background for this piece I did of Fir Darrig as a mock-cover to an eventual collection of his stories I'd like to do. So it only seemed fitting to honor the paper with a real painting of the character. Tomorrow I'll post a new original watercolor piece in my online store and I'll tweet and Facebook update when the art is available.

The technology is same whether it is small or big boat,you can implement new technology for trial basis in small boat.
Roger