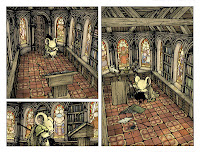 Black Axe #5 Matriarch's Room model:
In Black Axe #5 Celanawe enters a room just off of the Matriarch's office that is a private room of knowledge, memorial, and reflection for the leader of the Mouse Guard. You can see it here to the left in this collage of panels from the issue. This room needed to be special, it needed to be really special. I wanted it to have beauty and mystique. I had vision in my head of floating details, but not a complete room..so...I built a model. 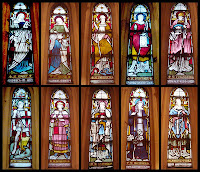 My first inspiration source was from a visit to Christ's Church in Dublin I made a few years ago. The baptistery was surrounded by stained glass windows of various patron saints. When I was standing in that room in Dublin, I said I wanted to make a room like this for the Guard, but one that featured Matriarchs instead of saints. I photographed the saint windows (and compiled them here into a single image) and kept them in a folder for later inspiration. I also had photos of the floor (which I used a single tile as inspiration for the floor of this room) and the rest of the church (arches of which will appear in Black Axe #6). 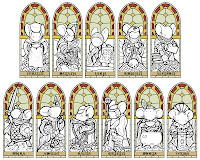 I copied the border and layout design of the saint windows and then went about drawing up stained glass versions of important past Mouse Guard Matriarchs. To make them more unique, I came up with some iconographic symbol of what the were known for during their reign. While I had mentioned Allyson & Laria in past Mouse Guard issues, I needed to come up with more past Matriarchs. Two of them are Easter egg characters from Legends of the Guard volume 1: Ferruin from Jeremy Bastian's story and Moria from Mark Smylie's. The rest were inventions as I drew them, though Dorys is an homage to my paternal Grandmother, who was the inspiration for the Guard being led by strong women in the first place.

The model itself is modular. Each wall is a separate piece with it's own floor base. All of the surfaces are cardboard with printed 'skins' glued on that I designed in photoshop. The windows are recessed printouts of my above designs. I made a ceiling section out of cardboard, craft sticks, and hot glue. When assembled, the tile sections of the floor match up and the ceiling can be placed on top while still exposing one open end of the room for viewing and reference photos. I will make sure this room gets a nice detailed cutaway section in the extras section of the Black Axe hardcover, so it will be nice to get this model off the shelf again.


*Edit*
I've added a video tour of the room as well as it's exterior & construction:
http://twitpic.com/am4yfu

*Edit 2*
Also added more photos below of the model from more angles: 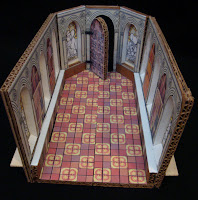 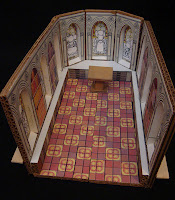 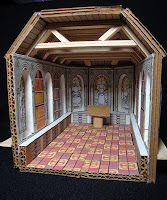 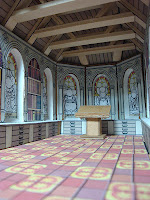 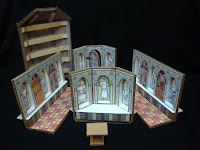 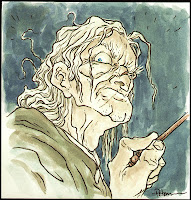 Last week's Watercolor Wednesday was a 2 part-er. The first piece was of the Auror Alastor "Mad Eye" Moody from the Harry Potter books. Here is a better look at the piece in case you missed it. I'm a big Harry Potter Fan (as evidenced by my original Harry Potter themed art collection). The rough for this painting was from a coffee shop sketchbook drawing seen here.

Because this sold so quickly, I decided to grab an older watercolor I had in the queue: An American Flag I painted in 2003 as part of the art for an invitation to our house-warming/my birthday on the 4th of July. Tomorrow I'll post a new original watercolor piece in my online store and I'll tweet and Facebook update when the new art is available.

SO very cool. Thanks for sharing.

Very Inspirational. As usual, David.
Thanks for sharing.