My 7th TMNT Micro Series cover is the April cover. This cover was tough for me in a few ways. First off, I'm not all that well versed in drawing humans well, and even worse if they are supposed to be pretty ladies. Secondly, April is a character that has been represented a different way with every TMNT reboot/relaunch/media. And even though I have my own favorite idea of who April is, I was having a hard time coming up with a layout interesting enough to be a cover for her issue. I talked to my editor Bobby and we agreed that the old VW bus was an iconic thing from the old comic and the new IDW comic that would serve as a nice prop for April to interact with.

My first attempt at a cover layout was deemed a bit too boring, and looking back at this, I completely agree. However when I got the email from IDW asking me to rework the layout, I was crushed, because getting me to draw a woman once is hard enough, getting me to do it a 2nd time with the same or better results is rare. Other notes that came in from Nickelodeon were to give April less of a passive pose and more sass, hide/eliminate the VW logo, and give the turtles a bit more visibility through the glass for the reader.

IDW suggested April twirling the keys on her finger, an idea I liked. But as I said, since I'm not great at lady-drawin', I had to work hard to get the drawing where I wanted it. This is was drawn in my sketchbook. I started drawing her on one side of the paper, but worried I had flaws in the proportions, so I flipped it over and looked at it on a lightbox so I could see the errors and fix them on the clean side of the paper. It means that this drawing is the mirror of what my original drawing started out as, but I found I liked her facing this orientation instead.

I worked up a drawing of the VW, the turtles, and composited them together with my April drawing. At this stage I fixed a few parts on April's legs and moved her right arm up to where it needs to be so the shoulder is in its socket. To make sure IDW and Nickelodeon knew what my overall color and value sense was for the piece I added a lot of color under-painting to the drawing. Yes, I did that on the first layout I submitted, but that was more to cover the shortcomings of the drawing, this time it was to insure everyone was on the same page so there was less chance of being asked to make unnecessary revisions.

Like my normal working process, once the layout was approved, I printed it out at full scale and placed it on a lightbox with my Strathmore 300 series bristol taped on top of it. I inked in all the piece with Copic MultiLiners (the 0.7 mostly, but also the 0.3 and a brush tip). I feel that I lost something here with the translation of April's face. It's always a trick to turn a softly rendered pencil drawing into hard inked lines, and since ladies aren't my regular days work, I don't have practice minimizing the softness-loss. It was after I noticed the difference in my pencils to my inks that I stopped myself from over-fiddling with her face any more, and did the cross-hatch pattern on the lower part of the bus to keep myself busy.

The last step was the color stage. I skipped over the flats this time, because they aren't exciting to see (and I've shown plenty of examples in the past). I used the eyedropper tool to pick out colors very close to my color layout sketch so that there would be no surprises as I went along. I tried to soften April's face with a more painterly approach to her color-rendering, but I was worried about over-doing it, because Nickelodeon had asked me 'not to make her nose so red' after approving the sketch. The turtles behind glass were achieved with a few layers in front of their base colors that lighten and mute their tones. 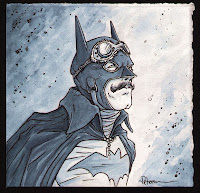 Watercolor Wednesday:
Last week was the first of my Watercolor Wednesday sales. This is a better look at the piece I offered up last week in case you missed it: A Gotham by Gaslight inspired Batman. Tomorrow I'll post a new original watercolor piece in my online store and I'll tweet and Facebook update when the art is available.

Fantastic. Great to get insight into the process. Thanks for sharing.

Oh Man, David - it's going to be like a feeding frenzy to get the art!! Great idea none the less!

Love your work, especially when there's VW related stuff in it! Love live TMNT's and VW's!

Best to ya,
Jay @ VW-Freaks.com

I really like this cover! Was her jacket color a shout out to the yellow jumper she wore in the Archie series? Anyway, I love this, and I think it's pretty cool how you have a good team to help shape the final product. Your first cover was good, but this one blows it away!

And I know you kept saying you're no good at drawing the ladies, but I think you did a great job on her. I mean...she's not a superhero girl! Haha! She doesn't need to look like a Marc Silvestri girl =)