For the second episode of THE PLOTMASTERS PROJECT, Jesse Glenn & I revisited one of his characters: QUIETUS.


To the left you can see my finished new piece for the QUIETUS episode of THE PLOTMASTERS PROJECT, and below I'll break down who the character was, and how I created this updated image for the podcast. 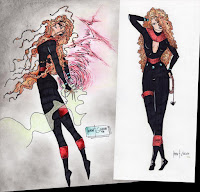 Let's start off with the original character. To the right you can see Jesse's early 90's high-school drawings of her. Quietus was a espionage type hero who's father made a pact with a demon which also included an arrangement of marriage for her. All of this dark muddling gave Quietus untested and vague--yet immensely powerful magic.

For my update drawing for the podcast I was challenged. I not only rarely draw ladies, especially sexy ladies, but even in my youth, I'd never drawn Quietus. I used some photo  reference for the pose (a yoga model doing a sorcerer pose?) and then tried to keep the basic design of flat-black bodysuit, red accents, metal bangles & bracelets, and curly scribble hair to make Merida from BRAVE jealous.

I ran out of room on the copy paper I was sketching on and had to tape another sheet on to get the full body in.

With the sketch penciled, I taped a copy of it (one I'd darkened & resized on the photo copier) to the back of a sheet of Strathmore 300 series bristol. Using a lightpad to see the sketch I used Copic multiliners to ink the piece. I inked Quietus on one side and then removed the sketch and inked 'vague magic' effects on the back side (using the lightpad to register the hands and body)

After the inks were finished I scanned both sides (mirroring the magic effects so they registered with Quietus) and started flatting the piece in Photoshop. The colors were established for me mostly by Jesse's original design. The magic (seen here as a separate semi-translucent layer). With the areas all established with flat colors, I could start the rendering and effects to get to the final piece.

Here again is the finished piece. All of the rendering was done using the dodge and burn tools and a textured brush in Photoshop. I toyed around with the color of the magic...shifting it from yellow to green to blue to red and back again. This was the version I was happiest with and I added in Jesse's symbol for the character with a little name typography to fill the composition in a bit better.

It was an interesting challenge to redraw not only someone else's character, but one who is all the things I try to avoid drawing normally. But, as we go forward with more Plotmasters Project episodes, I'm sure I will be pushed out of my comfort zone again...

You can watch the QUIETUS episode of
The Plotmasters Project on YouTube: